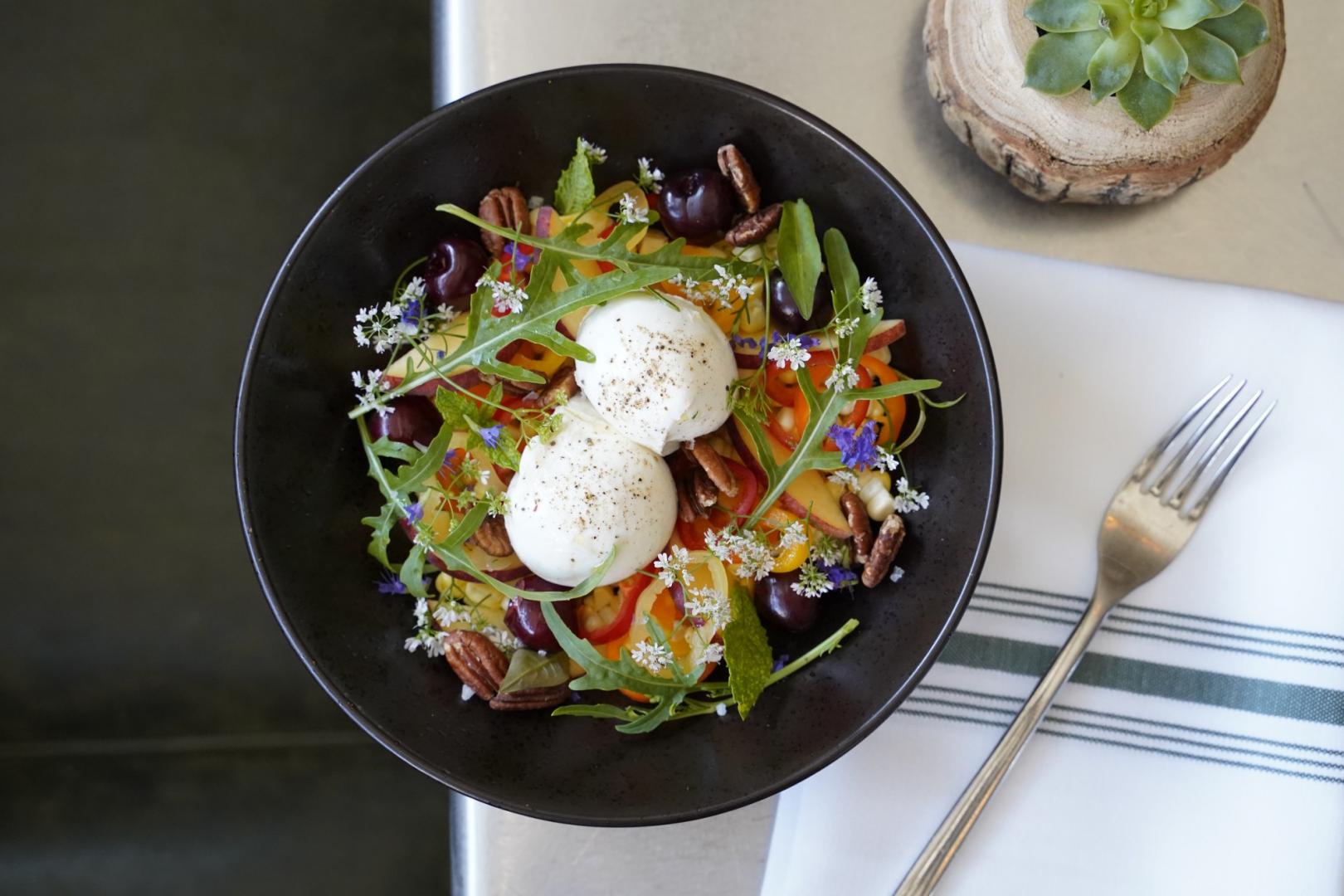 Eden is excited to add Burrata to our fresh summer menu, paired with corn, peppers, stone fruit (cherries), pecans, herbs, and grilled focaccia. As always, each dish at Eden is curated with seasonality in mind, and our burrata is no different. This burrata dish however, is a bit personal.

“Cherries are a very important part of who I am, having grown up in the cherry capital of the world, Traverse City, Michigan,” recalls Executive Chef Devon Quinn. “My first job at age 14 was working in a cherry packaging plant. We’ll use Michigan cherries in all varieties at Eden. I love the idea of using seasonal fruit as a sweet and acidic component in savory dishes. We typically compress them with good vinegar or verjus, cook them until they turn into liquid gels, and then leave some in their unadulterated raw state.”

So what exactly is burrata? First found in Italy in the 1920’s, burrata is Italian for the word “buttered,” which is used to describe the creamy and delicious interior of this cheesy dish. It’s said that the dish’s inventor was Lorenzo Bianchino, a farmer in Southern Italy. During a particularly bad snow storm one winter, Lorenzo couldn’t make his way to the town market to sell his mozzarella, stretched curds, and cream. In a moment of genius, he molded the mozzarella into a hollow round shell. The curds were then soaked in steaming water and pulled apart to be combined with the cream. The resulting mixture was stuffed into the mozzarella shell, and burrata was born. By the 1950’s, burrata could be found across the United States.

The best way to distinguish authentic burrata imported from Italy is to look for a wrapping of asphodel leaves. Early burrata makers wrapped their creations in the leaves to mark its freshness, and when the leaves withered a few days later, the customer knew the cheese wasn’t at its peak. Though this tradition still carries on to this day in Italy, Eden’s burrata lacks asphodel leaves because it’s delivered straight here from a farm in suburban Chicago.

“Corn is just coming into season and we use local Caputo’s brand burrata.  We did several blind taste tests and favored the local one,” said Chef Quinn. “We will start buying corn locally once it is available, but we’re currently sourcing from Iowa.”

The new burrata dish at Eden is available now, and we encourage everyone to try this incredible combination of flavors before cherry season comes to an end.